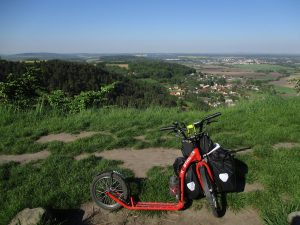 Scootering and Geocaching Along the Golden Path of the Czech Paradise 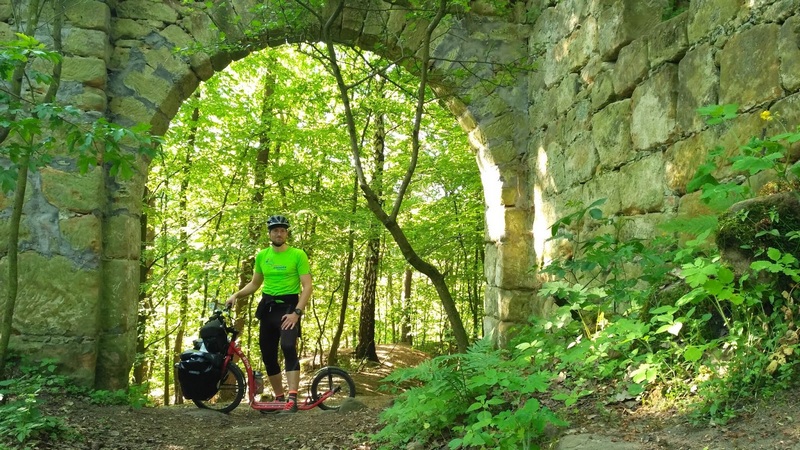 For quite a long time I’ve been thinking about a bit bigger scooter-geocaching action. Sometime last year I found out there is a geocache that requires going all along the Golden Path in the Czech Paradise (a beautiful rocky part of my home country). If I decided to hike it it would take almost 3-4 days, and alas, nobody would go with me. It could be done in parts but then it wouldn’t be such an experience. Therefore, I’ve been waiting for a warmer weather so that I could go by my scooter – and the time has just come. The cache listing contains also a bivvy list and the route was given so I set out quickly – the trip took two days with a night in Pantheon cave. I had expected a demanding terrain so I equipped my scooter with a homemade strap so I can carry it more easily. Of course I could unload the scooter and carry whole stuff by parts but it was an extreme option which I used only three times during those two days. 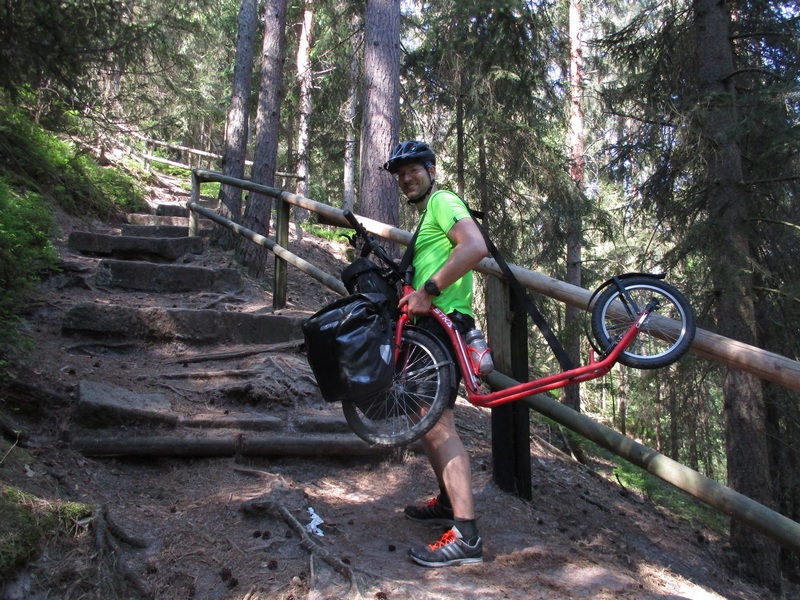 Before the trip I had planned the route at Mapy.cz and imported it via Dropbox to Locus. Besides the classic navigation Locus offers also guidance along the route which I didn’t need. Just seeing the route and my position on map would have done for me. Another useful feature is displaying distance to the end of the route when tapping it on map. I looked at it often especially in hard times when I needed to feel that kilometers are passing by. 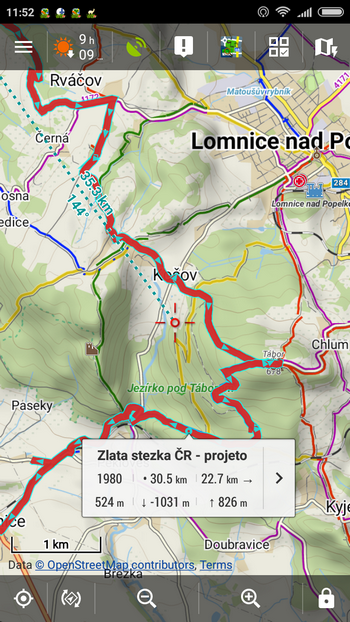 Dashboard is another nice feature. It is fully customizable with loads of fields and settings. I was content with elevation, passed distance and speed. This works when you record your track which I did on the second day when my Garmin battery went off. 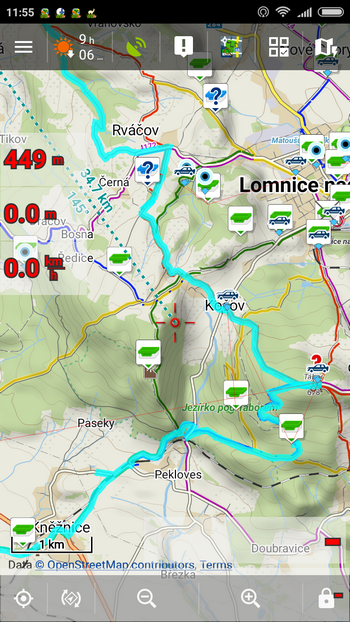 Last function I use the most is quick route planning. It comes handy when you don’t want to drain your battery with online data or when you want to travel off road. I use it mainly for approximate measurement of the route distance in unknown terrain because I often underestimate distances and then finish stuck in the middle of the woods without food and water. 🙂 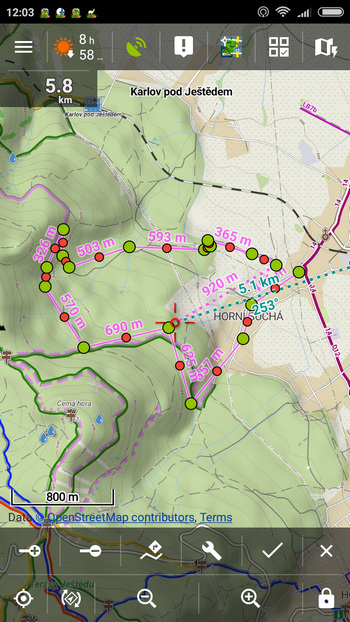 The second day I used Locus also for recording my track. The recording went smoothly and when the GPS was on I used it also for guidance to geocaches – I didn’t have to be careful about the cache distance as Locus always notified me when I was 100 m from it. This distance notification can be of course set according to your needs, as almost everything in this app. The guidance screen may seem a bit confusing for someone but when you come closer, the upper line shows distance from your actual position to the map cursor and the lower red one distance and ETA to the cache. 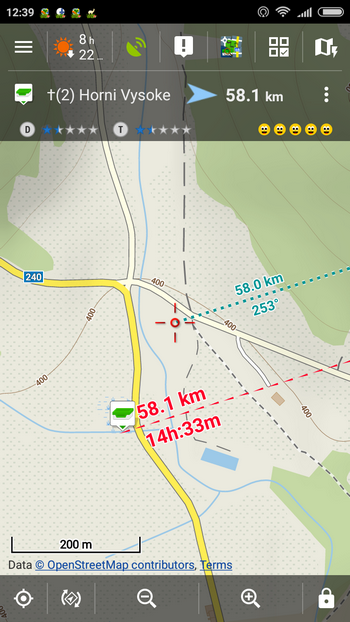 I must say I’m very enthusiastic about Locus. I’ve uninstalled Endomondo and I’m going to get rid of my obsolete Garmin too – support of this old model is equal to zero. My buddies – runners will surely appreciate the audio coaching feature enabling to leave your phone in your backpack. You can also set the out-of-route alert – when the route is accurate I’m setting 50m, when it’s just approximate, I’m putting 200m there. 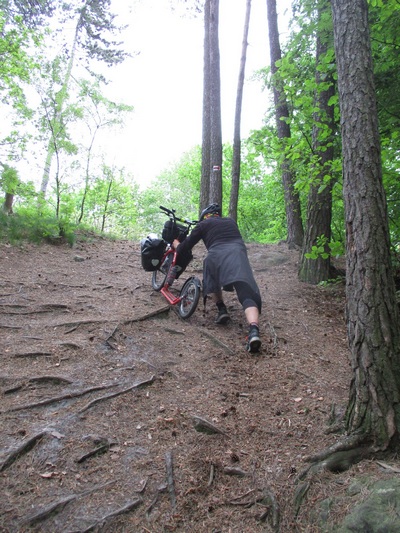 My scooter didn’t betray me too during all of the trip. Just one bags-holding screw got loosened which was not a problem. Regarding the kind of terrain I rode on, all that bumping and thumping, I think it’s a kind of a miracle. To sum it up, despite I thought I knew Czech Paradise quite well, there are still places I visited for the first time and that deserve one more decent trip. Of course I’ll get back there with Locus! 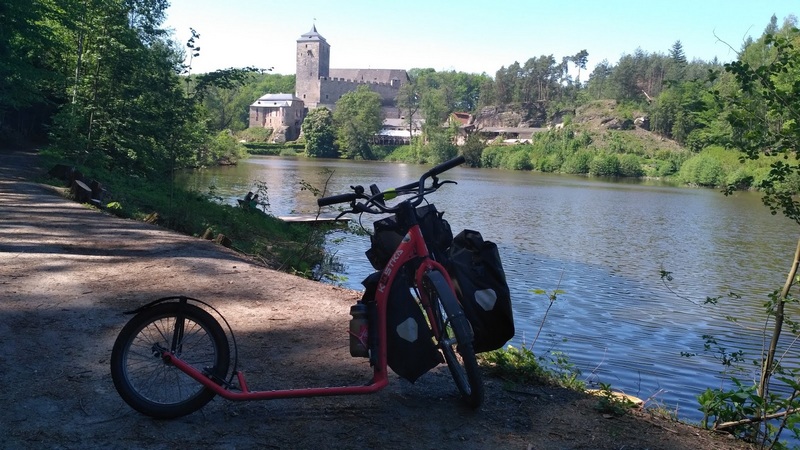