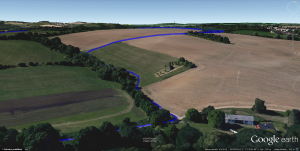 How to exploit the potential of Locus in Google Earth?

Locus Map can cooperate with many applications. Being it various map programs, sport trackers, add-ons from our own dev team or from our users. Today we’re going to show you a few options of exploiting Locus cooperation with Google Earth.

What is Google Earth?

In a nutshell, it’s a virtual globe, i. e. three dimensional digital model of the Earth. Originally named as Earth Viewer it was developed by the company Keyhole, Inc.. Google bought it in 2004 as many other tech gadgets. The model surface is covered by satellite and aerial images and contains several zoom levels. The globe can be rotated, tilted and you can watch the landscape on it in almost real form. Google Earth can be used in an ordinary web browser as a part of Google Maps, it can be installed as an autonomous software and also as an app in your mobile or tablet.

Locus provides a track, Google Earth displays it in 3D

The first treat we’ll talk about is rendering Locus track/route in the three-dimensional environment of Google Earth.

As you know, the track in Locus can be recorded, you can plan a route above a map or import it from other sources, it’s up to you. If you want to display the track/route in Google Earth, you’ve got a few options. And you can start with your mobile or tablet. If you have installed Google Earth app on your device, its icon and name is available in the “share” submenu of your track/route detail window: 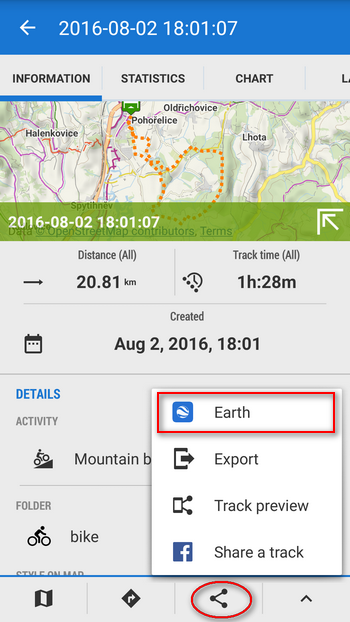 Just tap it and the track is displayed directly in your mobile Google Earth. 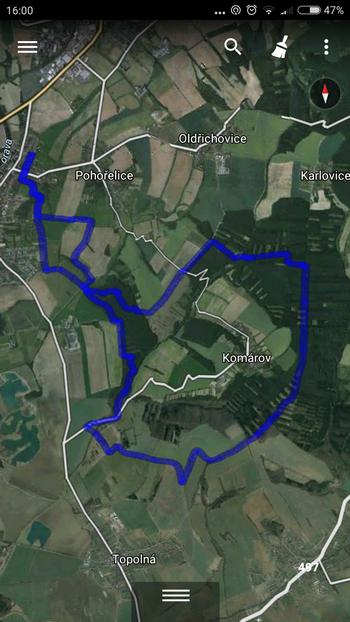 The upper view can be zoomed in and tilted to get a more realistic picture: 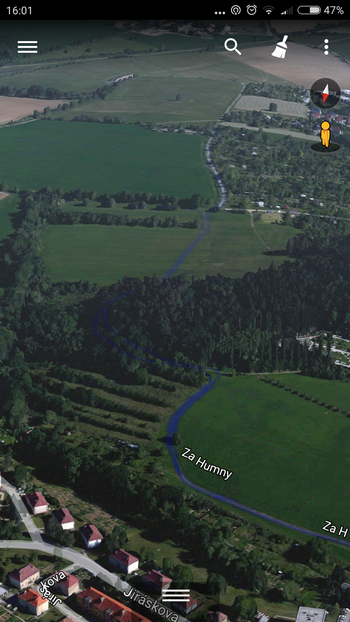 More can be squeezed from the Google Earth on a big screen of your PC. However, if you want to see your trip track on a PC, you have to export it from Locus first. Google Earth can read KML/KMZ format (abbreviation of Keyhole Markup Language – it’s based on XML and contains the name of the original company. “Z” is its zipped form). Select Export in the bottom menu in the track detail and choose KML/KMZ format: 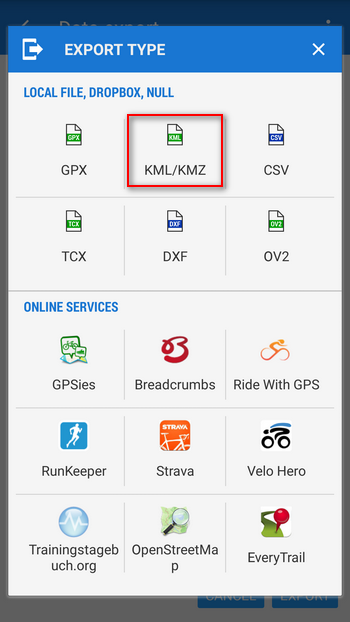 The best export destination is Dropbox or Google Drive – you don’t have to wire up your mobile with PC. Then open the file in your PC version of Google Earth: 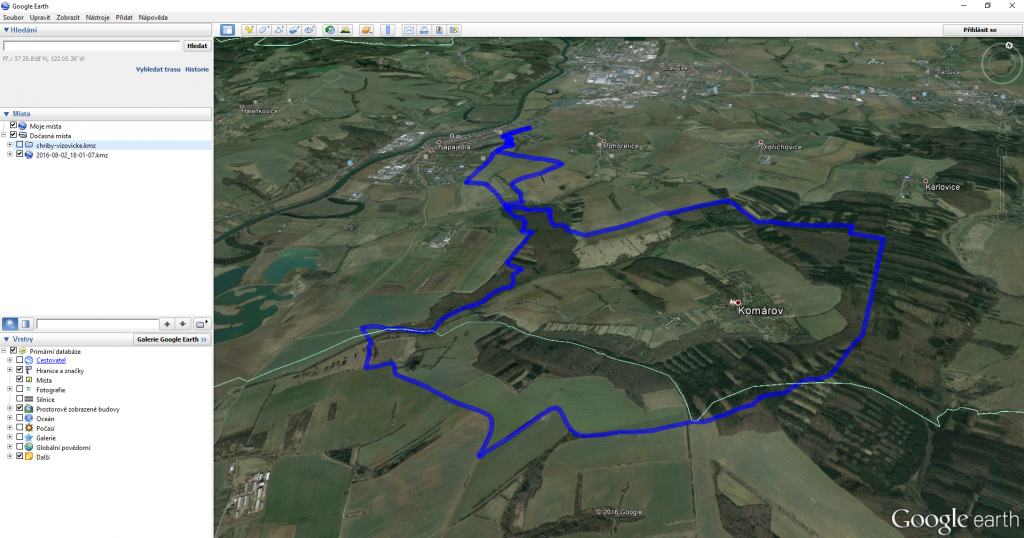 In some areas also smaller objects like buildings or trees are rendered in 3D. Your track looks like being drawn in a real landscape: 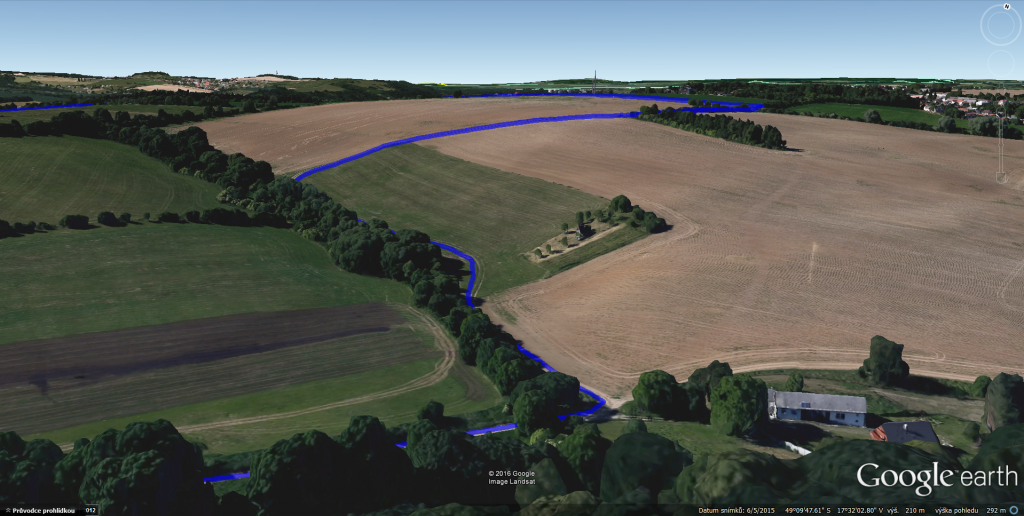 This way you can re-play your trip once again, in virtual environment.

Not only tracks or routes can be exported. This way also geocaches can be visualized:

Your old paper map in digital 3D? No problem!

If you combine the ability of Locus to display practically any map and the Google Earth’s 3D landscape model, it’s possible to do some more interesting magic. Firstly, check the Map calibration feature in Locus (available only in Locus Map Pro) that enables to convert any map image to a digitally usable form. We wrote about it in detail here >>. For this instance we ‘ve calibrated a bikemap by SHOCart. The resulting file is again in KML/KMZ format. Open it in Google Earth and your map is pinned onto the terrain model:

When you zoom it in and tilt it you can see clearly the terrain outline corresponding to the contour lines. Another advantage of Google Earth is that you can place the files on one another in layers that can be swapped or switched on/off. This way we got our track into the calibrated map: 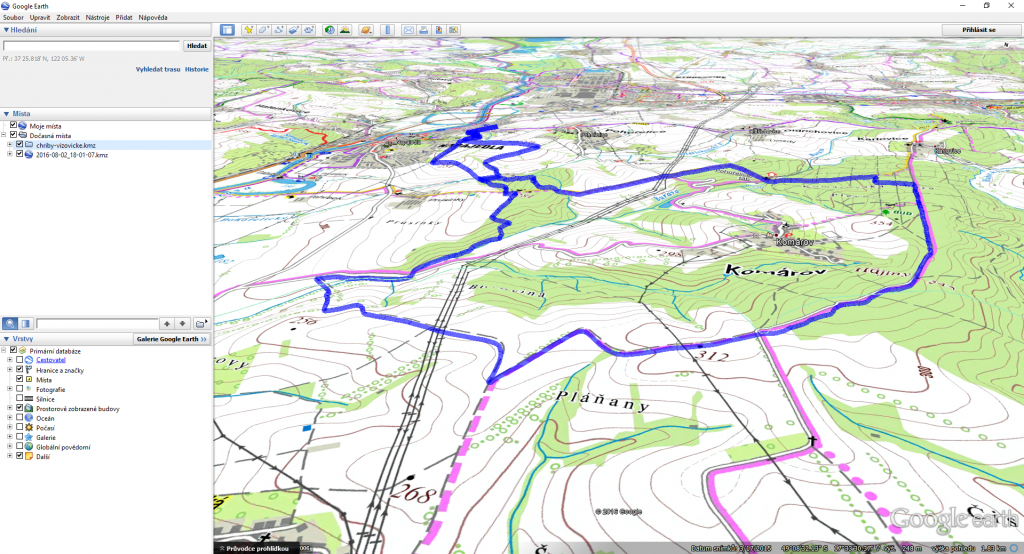 Google Earth is a big help for Locus map data visualization. If you have other hints, tips and tricks how to use Google Earth in association with Locus, please, share it with us!