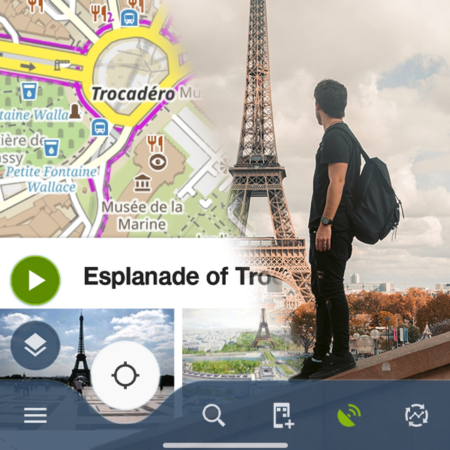 Thanks to you, we have completed the first successful year of the Locus Map 4 project

Sometime around this time, in 2021, we slowly began to release the first version of the new generation of your favorite outdoor navigation – Locus Map 4. After a year, we would like to offer you a small summary of what we have accomplished during that time. A lot has been done, mainly thanks to you and your support, both moral and financial.

Let’s start with what is most visible:

We’ve also added our own content and got rid of dependencies on external applications:

Our own maps, points of interest and router

Synchronize the application with the cloud, the web planner and across multiple devices

Locus Map has always been a purely mobile application with no server background. There was a radical change a year ago – you can now sync routes and points automatically:

Over the year you’ve synchronized over 1 million tracks and routes.

We used to think that planning a route right on your mobile phone was enough. And we did our best for that and developed the route planner in Locus to the best of its kind on the market. But the big PC screen just makes sense for planning trips and entire vacations. And so we developed a web-based planner with an associated library of users’ tracks and points.

We are constantly working on the web planner and library. A lot of improvements await you this year.

It wouldn’t be possible without you

Web services, synchronization, cloud, servers, storage, user support, continuous development – it all costs a lot of money. But thanks to you, we manage to get it all running. We are sure that the new subscription financing system really works to your and our satisfaction.

If you continue to support us in this way, we plan a lot of other great things:

Thank you once again for supporting us!