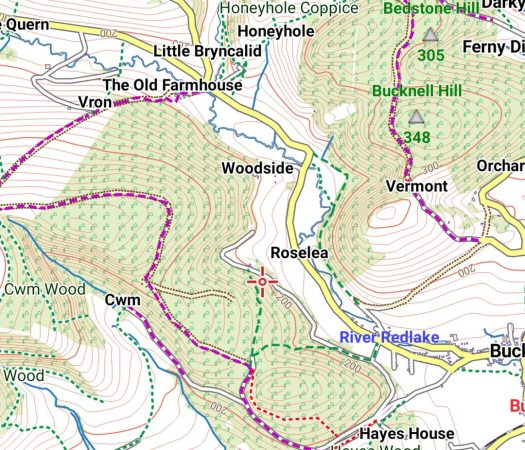 Twenty years ago, when you wanted a map for outdoor activity, the choice was between Ordnance Survey paper maps in either 1:50000 scale (“Landranger”) or 1:25000 (“Explorer”). Consumer GPS devices were just becoming available and smartphones were unknown. Fast forward and dedicated GPS devices are past their peak with a general move to smartphones with moving map displays that show you where you have been and where you are.

The digital maps used by these devices are either raster maps where the image is held on the device as a picture (more often a set of picture tiles) or vector maps where map features are described by their coordinates and type with the image being created by the device as it is being displayed. If you zoom into a raster map everything gets bigger; if you zoom into a vector map the places move farther apart but the width of the road between them stays the same.

The major OS maps, even digital versions, are still raster maps but the OS also releases vector data, some of it free.

Base – OpenStreetMap and Ordnance Survey Opendata

Open Street Map was formed as a project to map the world and make the result available for free. The data is collected by volunteers who input the descriptions and data for buildings, woods, rivers, roads into a vast shared database. Anyone can access the database and there are organizations that provide regular extracts in different formats such as Garmin and Mapsforge (as used in both LoMaps and mine).

The good thing about the Ordnance Survey is that the country is mapped thoroughly, regularly, and consistently. Set against this the price – which has dropped a lot in the past few years – and many features – shops, ATMs, street names – are not on the maps, and many topographic features are revised over a period measured in years.

The good thing about Open Street Map is the speed of update – days or less – and the wealth of data held in the central database but this has to be balanced by its inconsistencies. Just because Joe has mapped all the lanes in his supermarket car park does not mean Jill will do the same for hers. In towns and popular areas this is not much of a problem because there are many who will contribute but in remoter areas – see the screenshots for Stow Hill below – there is a lot of missed data. Another issue with OSM is that footpaths are included but they are rarely defined as Rights of Way.

When the OS started to release free map data with an open license I decided to try to create a ‘best of both worlds’ map.

The OS Opendata contains many products but the ones I use are “Local”, “District” and “Terrain 50”. But property boundaries and footpaths are not included in any of the Open data so I looked for other sources. There is a site “www.rowmaps.com” that aggregates rights-of-way information from most local councils in England and Wales; for Scotland (where the law is different) I have sourced “Core Path” data from some of the councils including Highland. (I believe that these are the only digital maps that show and identify Core Paths.) But in private lands such as Forestry and Nature Reserves, there are permissive paths that can be used but are not official rights of way. So I source footpath data from Open Street Map as well as other map features like Pubs, Toilets, Airfields, Abandoned Railways, and Viewpoints. Rights of way are in green or mauve, other paths in red. See the Legend for more details.

My maps include every building, road, railway, river, and wood known to the OS supplemented by the other data described above. Contours and spot heights are in meters. With the rights of way data, you can be sure that you are allowed to be where you are and you will not find your way blocked by an unmarked river. Sadly, though, there is no source of property boundaries that I can use.

The maps are designed for most outdoor activities – hiking, biking, equestrian, canoeing. The maps are revised with the latest data every year.

Below are a number of screenshots comparing my maps with OS and LoMaps (which are derived from Open Street Map): 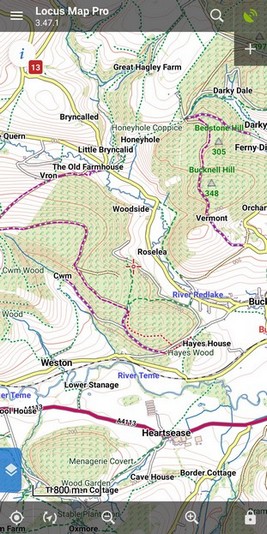 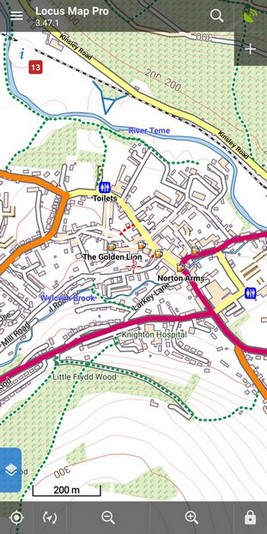 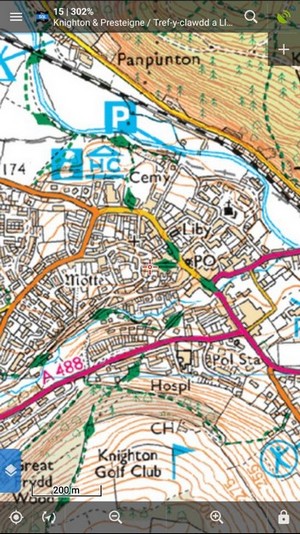 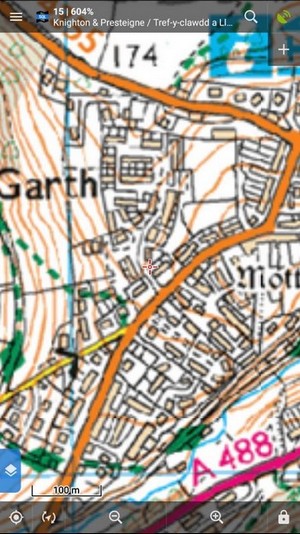 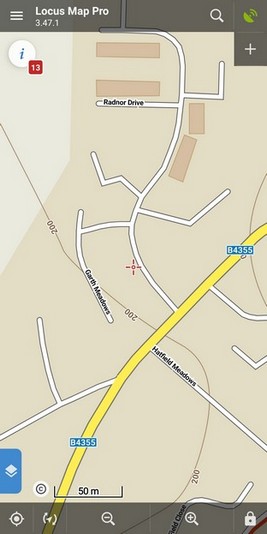 If you want to explore further – and I hope you do – the Lowlands map covering the area from the Tyne to the Tay is free for download.

My overall message is that the OS provides the best topographical detail at the highest price. If your trips are to places that are well mapped by OSM then LoMaps are fine but if you are going “off the beaten track” then my maps are probably the best value.

I would be happy to receive comments or suggestions: john@the-thorns.org.uk