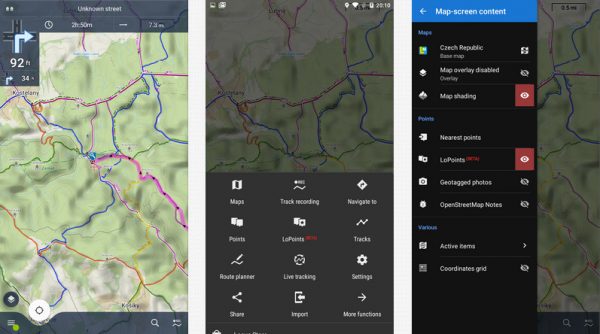 If you think nothing is going on around Locus, the opposite is true. We’ve almost tripled the capacity of our team in the last two years, and we now hardly pack into our small office during a complete team meeting. Fortunately, we mostly work in the home office, so we don’t get in each other’s way (and we don’t share various now popular infections). Work on our projects is currently continuing “double-track”. On the one hand, development and maintenance of the classic Locus Map Free and Locus Map Pro branch continues. On the other hand, and here lies the focus of our efforts over the last two years, we are working feverishly on the development of a new generation – Locus Map 4 . Which is no longer “just” an application, but also an extensive environment of accompanying services.

So let’s start with the classics . After all, when the new generation of the app is launched, we’ll name this series this way. So what’s new?

We’ve simplified the setup of the route generation service BRouter . We’ve removed the option to select navigation profiles defined directly by this service. On the one hand, this will make the profile selection much clearer, and on the other hand, we are forced to do so by the restrictions of the new Android 11 – Locus Map will no longer be able to access other app directories , including BRouter. However, geeks don’t despair, you will simply place your custom profiles in a folder directly in the Locus directory structure and select them in the router configuration – they will be separated by an extra header.

For those of you who have no idea about this, these are batch changes to your entire app settings . If you want to make the most of Locus, you can’t do without them. The versatility of Locus lies in the huge number of functions and settings of the application. However, if you use Locus for various different activities, you always need to reset it. Presets make this process incredibly easy – you can then reset the whole app with two clicks – 1. open the presets, 2. click on the preset. You can change the settings of the function panels, the map theme, the recording profile, the map rotation, and a lot of other parameters at once. Initially, presets worked in two modes – basic and advanced . However, we’ve found that basic mode is unnecessary, so now presets work directly in advanced mode . In it, you can choose which specific settings you want to have in the preset.

In addition to these two major changes, of course, the version contains a number of minor adjustments and fixes, as you’re accustomed to.

What’s up with Locus Map 4?

A lot is happening. A lot is almost done and ready for demanding testing, but still, there’s a lot of hard work ahead.

The synchronization of data from the application with our own cloud storage is also in the phase of internal testing. No more worries about losing data when resetting your phone, switching to a new phone, or using Locus on multiple devices at once will be a breeze.

We also converted the original purely offline content online so that we could have it available for the new web route planner, and also to solve one of our big pains – points of interest search. After disconnecting from Google, we significantly missed it…

We have brought the planner in the application almost to perfection. Now it’s its web clone’s turn – after all, in the warmth of home with a large monitor, the route is planned more comfortably. Here, however, we still have a lot of work to do – we don’t want to offer you any semi-finished product, but a well-tuned piece of software. There is a lot behind us, but also a lot ahead of us. So we don’t want to promise anything, but we firmly hope that we will enjoy next season with the new Locus Map 4.

Then keep your fingers crossed for us!