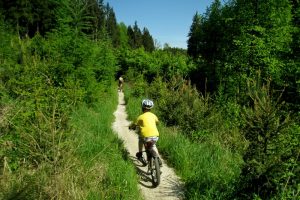 Weekends in Rychlebske Mountains have become my „highlights“ since I with my coleague were invited by Cerna Voda major Pavel Hornik to map local famous bike trails. A lot of things have changed since then – Rychlebske trails boomed into a MTB resort offering more than 60 km of trails of various difficulty, beginning with easily flowing paths ridable by kids ending up in the hills with rocky trails for hardcore riders. And Pavel is not major any longer, being fully concentrated on his dream project. And the result is apparent – the trails keep winning various visitor polls, the region revived with a wave of bikers not only from Czech rep but also from nearby Poland and Slovakia.

It’s not about the trails only. Rychlebske Mountains overpower you with their simple and pure beauty, where you can spent your time many ways, no to just on a bike. Therefore I welcomed when we made a free weekend, threw stuff and kids in the car, the bikes on the roof rack and were looking forward to the arrival for the next 150 kms. 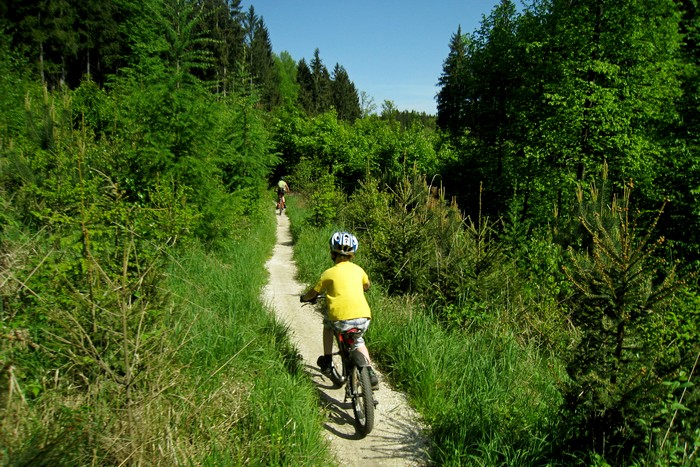 Saturday we devoted to the main allure – ride along the Rychlebske trails. The family and bikes were ready right after the breakfest, the youngest one buckled up in the child seat and we merrily set off. That reminds me – the phone mounted on the steering bar and Locus transformed into a cyclecomputer (dashboard, guiding along the route rather because of my-geek-self as the trails are perfectly marked, and of course the track recording on). When you come with kids the Northern side of the resort is the primary choice – we start with the trail along the romantic valley of Cerny potok (Black brook). The trail is empty, just from time to time we let someone quicker pass by. Most bikers concentrate in the more demanding parts on the foot of Sokoli vrch. 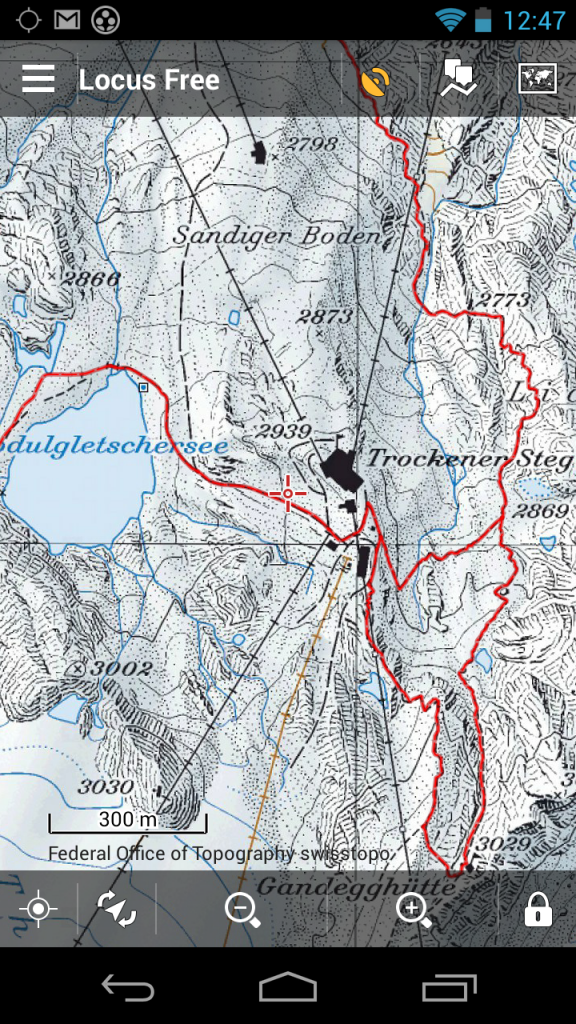 We are having a break on the bridge across the Cerny potok. Boys are building a dam and throwing pebbles in the water, the rest of us is having a snack in the grass. The youngest kid peacefully sleeps buckled up in the seat. Overviewing Locus I found out we had ridden about a quarter of our trip so we slowly got up and moved. Waves and banks of the playful circular trail near Vidnava comes next. The recently built trail is really enjoyable both for us and the kids. One hill left and the long awaited refreshment in a Vidnava pub follows. We got pretty hungry!

On the way back we are enjoying the bucolic countryside along forest tracks and the trail of the Czech forestry. 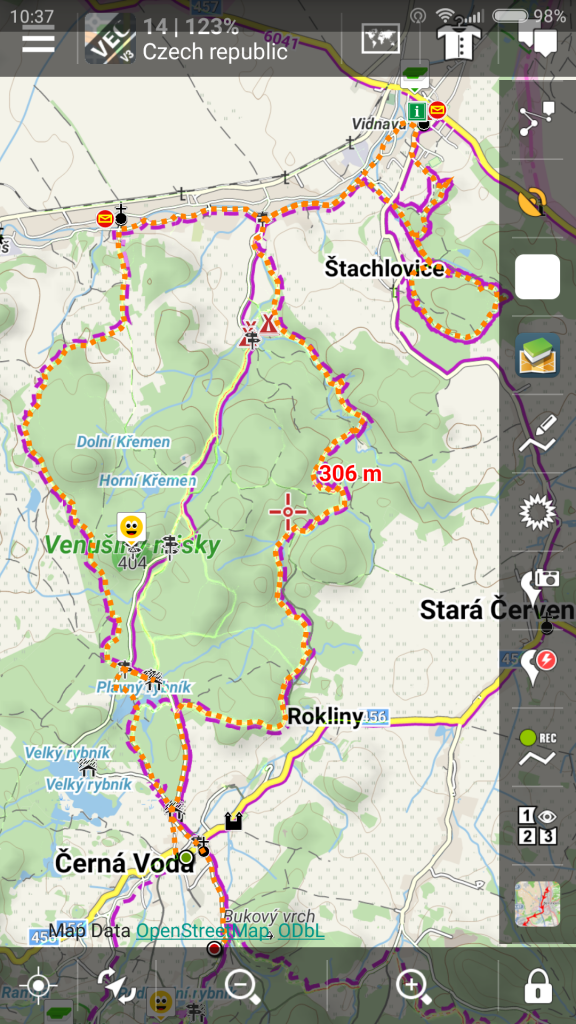 It was beautiful and very intense, mainly for the kids – we rolled some 29 km in the wavy terrain. Being connected on wifi at our cabin I export the trip to my friends on Runkeeper. Now it’s time to rest. Sitting at a camp fire with a view of sunlit Sokoli vrch we bid farewell to the first day.

It’s a long way home so we can’t afford another whole day trip. I planned a decent circular walk across the hills nearby Zulova, accompanied by hunt for a couple of geocaches. I downloaded local treasures to my mobile via the Geocaching4Locus. Three will do for today – the hills where we are going to fetch them are pretty steep – Bozi hora and Borovy vrch are awaiting us. Both hills are of igneous origin and the material they are made of (granite) named the nearby town – Zulova. 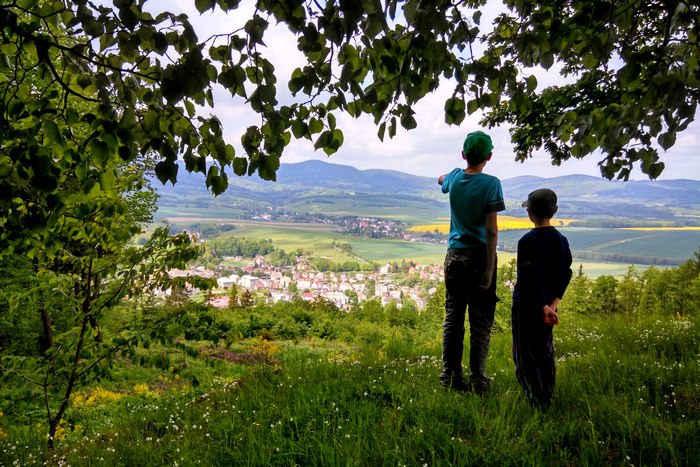 The baby in the backpack seat seems to weigh twice as much when we are struggling upwards the first hill. The geocache named „wedding“ is hidden out of the path somewhere under the summit. Locus Map leads us without compromises. Its geocache alarm starts beeping in my pocket 100 meters from the cache and quickens meter by meter. „Daddy, you’re like a ticking bomb„, my sons announce. They’re damn right when I completely exhausted and dripping sweat explode in a hilarious enthusiasm finding the cache. The same at another treasure that was hidden in a rock right next to the church of Our Lady of Sorrows. There are quite remarkable views of the town from there. My alarm starts beeping for the last time on the foot of the neighboring Borovy. Not this time was it hard to find the cache although there were loads of hiding places among the barren boulders. The GPS is relentless and is beeping „zero“ perhaps a meter from the cache. I’m logging offline via the Fieldnotes addon while the kids are playing hide and seek among the rocks. Anyway I would seek the GSM signal in vain in this place. 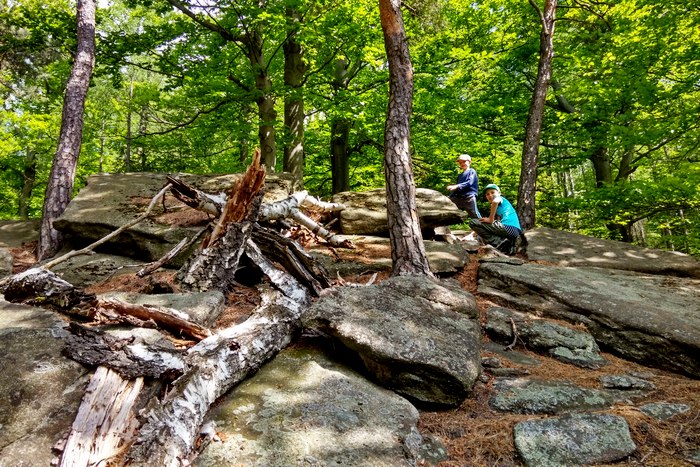 It’s noon, our bellies are rumbling again so we head on downhill towards the civilization. Anyway, it’s a granite stone’s throw from Borovy and so our hunger can be saturated soon. Well, I’m looking forward to getting back here again, sometime in the middle of summer – we’ll explore local flooded quarries offering cool swimming refreshment. And as I can see in the Locus Maps, there are many of them!